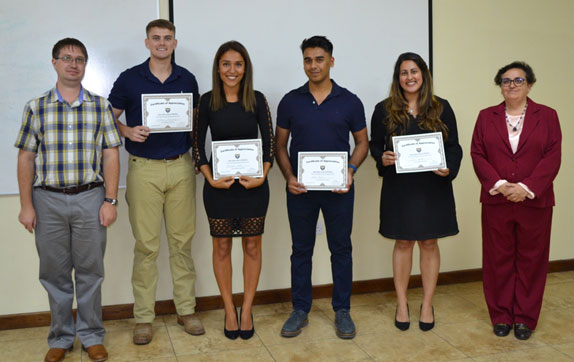 as a celebration of science as fourth semester medical students at the Saint James School of Medicine in St. Vincent got a jumpstart on their medical school research requirements when they conducted original research projects. It was part of their Research in Health and Medicine (RHM 3) course requirements and students explored a variety of topics in their research from depression to weightlessness. Six projects in total were developed by student teams under the supervision of three faculty mentors.

First Place was awarded to six students for their presentations of the following two projects:

2.“The Evaluating of the Methodology Employed to Screen for Newborns with Sickle Cell Anemia (SCA) in Developed and Developing Countries; A systematic Review” by Yvonne Kabia, Kalsuum Nasser Deen

Second Place was awarded to three students for their presentation of the following project:

Third Place was awarded to seven students for their presentations of the following two projects:

5.“The Role of CCR5 as an Anti HIV Strategy; A Systematic Review of the Literature” by Ikem Obinna, John Bermeo, and Ann Anonye

More in this category:
Diversity in Medical Schools: How our differences bring us together
Next Story:
SJSM Alum Talks About Getting Matched And Shares Her Advice for Prospective Students