Diversity in Medical Schools: How our differences bring us together

In Chicago in 1847, David Jones Peck, an abolitionist minister’s son, became the first African-American to graduate from a U.S. medical school. History making? Certainly. But that same history also illustrates the fact that the healthcare industry has long suffered from inadequate minority representation.

And even as the ethnic diversity of the U.S. and Canada increases, this deficiency continues to be a problem. According to the Association of American Medical Colleges (AAMC), the United States will soon face a healthcare crisis on two fronts: an overall shortage of physicians, and an even greater lack of physicians from culturally and ethnically diverse backgrounds.

Why is diversity important?

It’s long been known that ethnicity and cultural and social factors can affect an individual’s health, as well as the care they receive. Physicians need to understand these issues and respond effectively. That is why minority patients are more likely to choose a minority physician of the same race and to report greater satisfaction with their care. Minority physicians are also more likely to work with underserved ethnic minorities and Native Americans, filling a growing need.

Dr. Ali Lofti, a contributor to U.S. News & World Report, suggests that prospective medical students should look for schools with students, faculty and staff from varied backgrounds. “If you learn to work with diverse colleagues and patients from the early stages of your training, you will be better prepared for the future practice of medicine.”

Medical schools should be the key agents of change in increasing cultural competency of their students, according to a study in The International Journal of Medical Education. Diversity of the teaching staff plays an important role. Currently, only four percent of U.S. medical school professors come from underrepresented ethnic groups.

At Saint James, we understand and encourage diversity. It’s part of what makes us special. 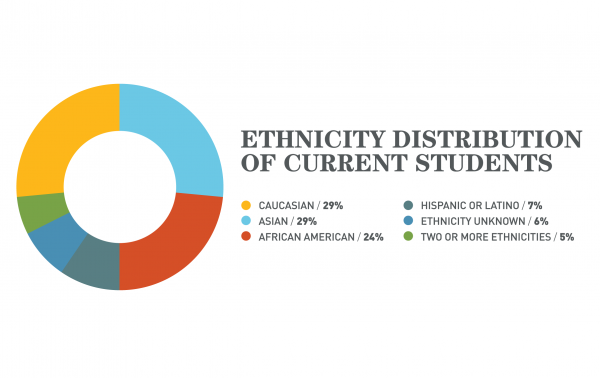 We offer opportunities to Caribbean medical school students from the U.S. and Canada who come from many cultural and ethnic backgrounds. We also encourage older students to apply; age can make it more difficult to gain admittance to American and Canadian schools.

Our professors also come from a wide variety of ethnic backgrounds, allowing students to immerse themselves in the same multicultural professional relationships they will encounter in the future.

The high cost of U.S. and Canadian medical schools can be a barrier to many minority students. Saint James provides the same high-quality medical education and opportunities as mainland schools, but at one-third the cost.

Saint James also encourages professional interaction with its greater communities. For example, the SJSM St. Vincent Chapter of the ASMA (American Student Medical Association) “adopted” the Calliaqua community in St. Vincent and the Grenadines and provides health screenings and health-awareness programs that reach over 300 Vincentians.

Diversity is not only an issue in medical education. At Saint James it’s also a solution.

More in this category:
Dispelling the myths of international medical schools
Next Story:
Why should you attend an accredited caribbean medical school?

This website uses cookies to improve your experience while you navigate through the website. Out of these, the cookies that are categorized as necessary are stored on your browser as they are essential for the working of basic functionalities of the website. We also use third-party cookies that help us analyze and understand how you use this website. These cookies will be stored in your browser only with your consent. You also have the option to opt-out of these cookies. But opting out of some of these cookies may affect your browsing experience.
Necessary Always Enabled
Necessary cookies are absolutely essential for the website to function properly. This category only includes cookies that ensures basic functionalities and security features of the website. These cookies do not store any personal information.
Non-necessary
Any cookies that may not be particularly necessary for the website to function and is used specifically to collect user personal data via analytics, ads, other embedded contents are termed as non-necessary cookies. It is mandatory to procure user consent prior to running these cookies on your website.
SAVE & ACCEPT
--> --> -->