According to WHO, cardiovascular diseases (CVDs) are the number one cause of death globally; representing 30% of all global deaths, meaning that more people die annually from CVDs than from any other cause.

The bad news is that the number of people who die from CVDs (mainly heart disease and stroke), will increase – CVDs are projected to remain the single leading cause of death.

The good news is that most cardiovascular diseases can be prevented by addressing risk factors such as tobacco use, unhealthy diet and obesity, physical inactivity, high blood pressure, diabetes and raised lipids: behavioral risk factors are responsible for about 80% of coronary heart disease and cerebrovascular disease.

The effects of an unhealthy diet and physical inactivity may show up in individuals as raised blood pressure, raised blood glucose, raised blood lipids, and overweight and obesity (so called “intermediate risk factors”).

SJSM students performed a research on those risk factors that indicate an increased risk of developing a heart attack, stroke, heart failure and other complications in people in Bonaire.

The results are below: 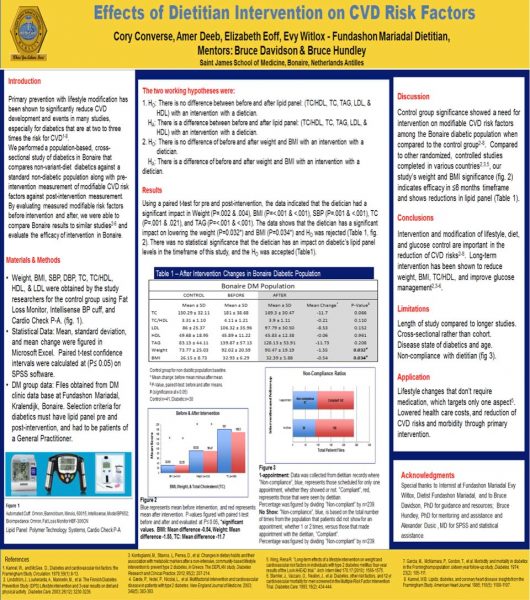