International public health officials are warning that complementary and alternative medicine (CAM) usage is neither regulated nor monitored the way it should be. CAM use is not commonly reported to, or detected by, health care providers. But CAM use is much more important than we assume. Herbal and dietary supplements, for example, used by nearly 1 in 5 Americans, are the second leading cause of drug-induced liver injury. On the other side, some CAMs undoubtedly are a useful addition to the prevention and treatment of certain conditions and some undoubtedly can contribute to the healthier lifestyle and general well being.

CAM use is increasing all over the world. In the US the number of all Americans that used some form of CAM had nearly doubled between 1990 and 2002. The  numbers remain on the rise: today, more than a third of Americans use some form of CAM.

The understanding of the conventional treatment options is based on the evidence, but CAM use is not being matched by evidence-based evaluation of the various treatments and therapies that fall under its umbrella. Therefore, the real importance of CAM  in terms of its short- and long-term benefits and risks is not known.

While the options and choices of conventional treatment remain similar all over the world, the choice of CAM differs in different populations even in the same country. In the US, for example, the gap in the rate of CAM use is expanding: e.g: whites are more than twice as likely to see a CAM provider as African-Americans or Hispanics. CAM use by Hispanics increased by only 1% over the five-year period. Asians used CAM practices only slightly less than whites.

Understanding the reasons for the differences and the varieties is probably the most important next step in the research on CAM use. 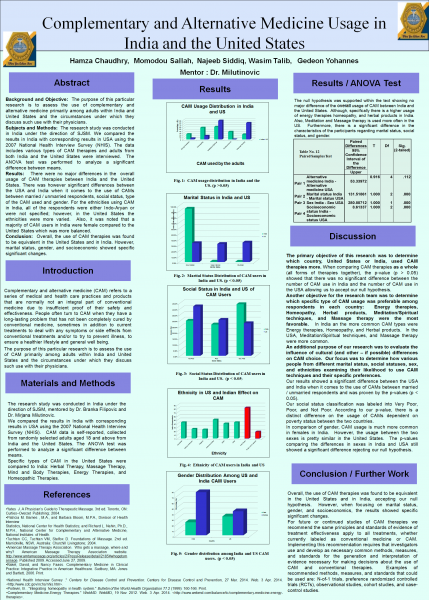